In parallel to the articles about other well-known music bands, I have been composing a solo EP which you can listen to here. I find it interesting to deconstruct it in the same way as the rest of the remakes to dive into the composition and production techniques that I have used, the color of the chords, and the structure.

You will surely find that many of the production resources explained in the previous articles have been a source of inspiration for these songs, since they are bands that I usually listen and end up merging with my style.

In this article I am going to analyze the first song of the EP. The song was born from the progression of chromatic chords in the verse, with a special effort to achieve a melodic and aggressive bass line in the line of Thundercat, supported by an incessant drum beat like Yves Tumor, and a chorus that unfolds a synth instrumentation with references to Blood Orange or Hiatus Kaiyote.

You can see the performance of this song below:

The structure of the song is as follows:

First of all I would like to do a brief music theory analysis about the chords and structure of the song. This song could be divided into two parts with a different sound: first the verses and pre-chorus, and secondly the choruses.

In the verses the chords follow a form of composition called "pantonal" or by patterns. Composing by patterns consists of maintaining the same interval between the bass notes (in this case 6ªM-2ªm-6ªM) and playing chords that are not tonally related to each other.

As can be seen, the 4 chords have the same construction (minor with ninth “m9”) so they lack a tonal relationship to each other, and follow the interval pattern described above.

After a few verse sections, pre-chorus parts appear from time to time. You could say that it is like a kind of exit tail of each verse, which either links to the next verse or makes a special exit to the chorus by adding the A7 chord (#9,b13) right at the end. These pre-choruses are a succession of major and minor chords anchored on the same note, which gives a feeling of retention and expectation. This succession of majors and minors can be called "parallels". In the case of the last pre-chorus that gives way to the chorus, there is also a last extra chord A7 (#9,b13), which acts as a deceptive dominant; a dominant that does not resolve by ascending fourth (it does not resolve with the classic V-I) and therefore is said that it “disappoints":

Analyzing the chorus, we find that it becomes a functional part with chords in tonal relationship with each other (VI - VIm - IV - II - V), and would be on the scale of C Maj. The most characteristic of this part is the game of the first chord Amaj7 followed by Am9, which does not become a modal exchange because there is no way whose IV degree is a maj7, but it can be analyzed as parallel chords again. This resource of starting with a major chord followed by a minor chord gives a very characteristic color, a technique that you can also find in many songs, such as the chorus of “Show Me How” by Men I Trust, which I have also analyzed here.

The synthesizers used have a lot of presence in this song, being the main harmonic base, and melodic in some parts, like the instrumental after the first chorus.

In the verse I have used 5 synthesizers playing the same chords. This technique is often called synth layering and makes them complement each other creating a more solid and enveloping sound base.

These 5 layers are made up of 3 layers of the u-he Diva synthesizer, each one adjusted differently. way, a layer of DX7, and a layer of Arturia's Stage-73 with Rhodes sound. The song begins with 3 of these 5 layers, and the other two are added when the voice enters to achieve greater density.

Below you can listen to each layer separately, and then the 5 layers in unison to see how they complement each other:

In the verse, there is a barely audible detail of Arturia's CZ that appears in the chorus parts "i feel ashamed".

The chorus unfolds a Blood Orange-inspired pad that wraps everything around, with the following setup, listen to it below.

A succession of notes is added later with two layers of DX7; an almost toy electric piano sound, with a lot of percussive touch. They have the same configuration, but one of the two layers is transposed an octave higher.

Finally, on the instrumental after the first chorus there is a melodic keyboard solo with two layers of Arturia's CZ inspired by Hiatus Kaiyote and those arcade-sounding synths. One of the layers acts as a bass-synth main body and another layer is higher pitched with some delay for presence. Listen to both sounds below.

Bass is one of the fundamental parts of this song. Being a very melodic bass in the verses, I wanted to achieve a sound that would stand out above the mix as well as blend in with the kick. The effects chain that I have used to mix is made up of Waves' CLA compressor, passed through the Guitar Rig 5 with a basic bass amplification setup, by the Waves SSLChannel to define it, the classic Waves RBass to give it sub- bass-boosting harmonics, the TabFilter Pro-MB multiband compressor to control the low frequency bands, and a final EQ for shaping.

Listen to the solo bass until the first chorus below.

The guitars do not carry much weight in this song, appearing only in the second half of the verses with a funky strum and a filtered high-end sound. I have used the Guitar Rig 5 to amplify the guitar and for that filtered sound I have used the Goodhertz Lohi with the following parameters. Hear it below.

To speed up the creative process, on many occasions I use drum loops from different sound banks, something quite common in R&B groups, as is the case with this song from The Internet that I analyzed on this website, among many others. You can listen to the drums loop used here.

To get the best result, I have tried to isolate the drums and snares to mix them separately. I've also added extra chorus cymbal hits to give this part more air and stereo. Listen to the cymbals below separately and in conjunction with the entire kit.

The voice in this song is made up of two tracks of main vocals in the verses, which increase to 4 tracks in the chorus to give more density to the voice.

The effect chain I have used is the same for all tracks, except for some final EQ setting to differentiate some voices. The effects that I have used are the Autotune Pro 8 by Antares with a slight adjustment without losing the natural character of the voice, the Virtual Mix Rack where a microphone emulation, an EQ and a compressor, the TabFilter Pro-DS to correct the pronunciation of some "s", and the TabFilter Pro-Q 3 to give a final EQ to each voice.

I also usually record quite a few tracks at once for a larger soul-style choir effect. For example, in the pre-chorus where the choruses that repeat “i feel ashamed” appear, there are 5 tracks playing at the same time.

In the chorus section, the voice is wide, where the main voice rests on a base of choirs that hold some notes, and where other choirs repeat a phrase. Listen to it below.

Finally, I send all these voices to various return channels, where there are mainly short and long reverbs with the VerbSuite, short and long delays with the Waves H-Delay, and another channel with Behringher's Dim D64 to give stereo-width to the voice.

Finding a good sound for your voice is perhaps one of the trickiest things, since you will first have to find where you feel most comfortable singing over time, and then give it a further spark of personality by exploring mixing and production techniques of the voice that best suits the style of music you want to make.

That's all for now! I hope you enjoyed this review and this song. Do not forget to give a listen to this first EP that I have composed and that you have available on Spotify!

Remember that you can support this project on my Patreon page, where you can also download additional exclusive content and songs in digital format with some surprises, apart from being able to contact me directly for any feedback!

Thank for your time, see you in the next article! 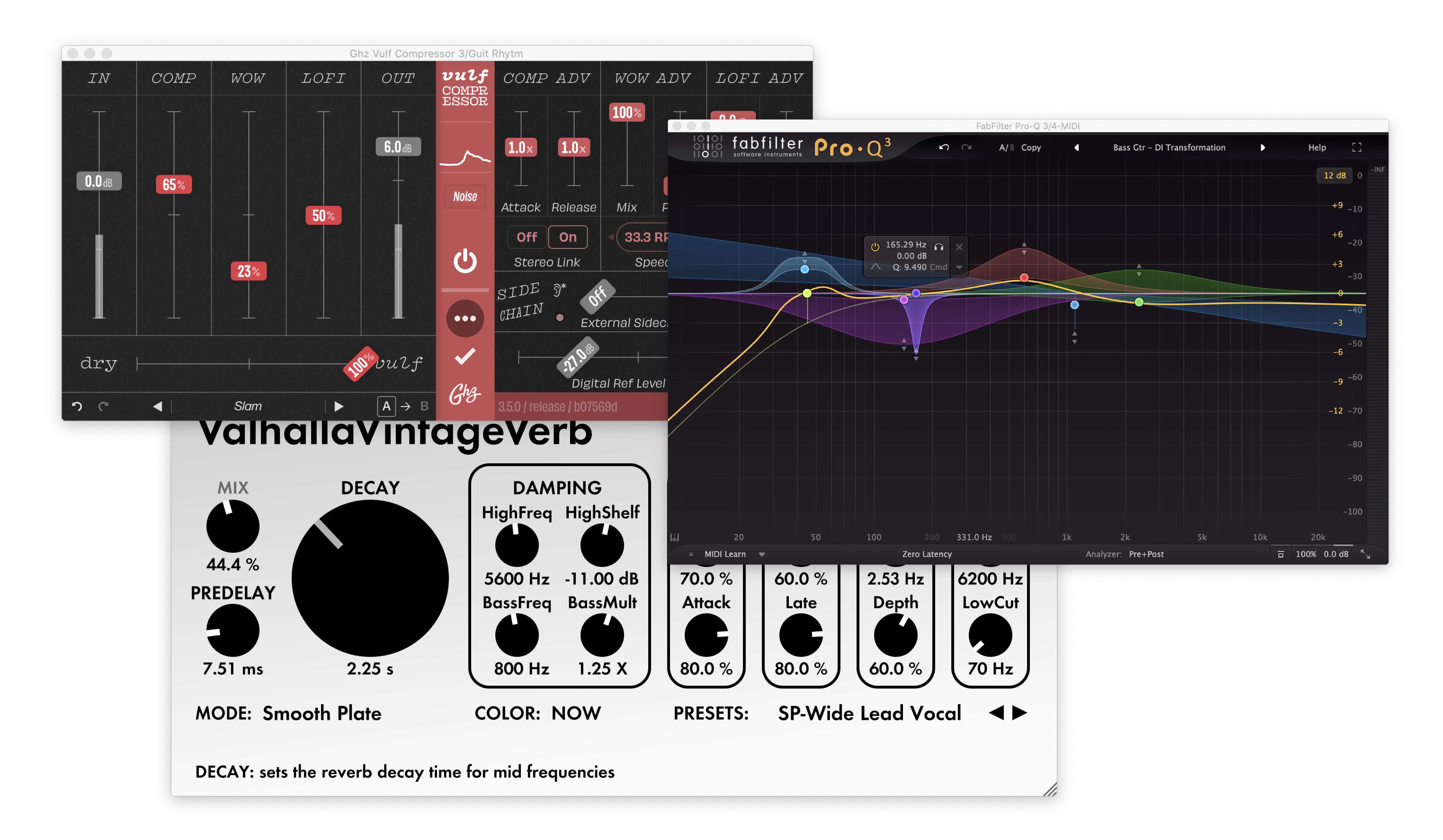